My Desperate Search for a Good Chocolate Croissant

A few years ago, I took a trip around Europe visiting friends, finding myself, the basic Euro-trip. Thanks to a friend of a friend gladly taking me in, I was able to stay in Paris for two weeks. During this expanse of time, I wandered through the Musee d’Orsay, dined solo, flipped through used books on the left bank of the Seine and spoke plenty of broken french. But the main focus of my time spent in Paris was on little hole-in-the-wall cafes and patisseries and chiefly, their chocolate croissants. 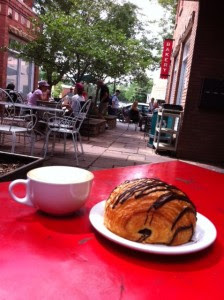 Chocolate croissants have always been a passion of mine, a cafe go-to, a source of very particular, high standard snobbery, and a definite feel-good treat. This all started in LA, my hometown, with a series of early morning trips to one particular coffee shop with my dad. I would get a chocolate croissant, he would get a double espresso, and we’d play cards until he had to drop me off at school. I developed my favorite coffee shops based on their chocolate croissants and since then, I’ve been on a constant mission to taste and judge every good looking chocolate croissant that comes across my path. Well in Paris, this could have been a full time job. And during my stay there, I treated it as such. I found two sources that blew all the others out of the water.

One of them was La Duree, a pricey and extravagant Parisian pastry shop that greets its guests with wall-to-wall glass cases of pastries, bon bons and a rainbow of macaroons. The chocolate croissant was beautifully made, technically flawless, down right scrumptious and held first place for the first half of my trip. What La Duree is really known for however, are their macaroons, a little box of which I later received as a very short-lived and well-appreciated gift.

The other source was the patisserie Lenôtre on the Avenue de Victor Hugo, which was recommended to me by a fellow cafe-goer and pastry hound, and whose bounty I enjoyed on a park bench along one of the innumerable, gorgeous, tree-lined avenues of Paris. I don’t remember the details of the croissant but I do remember journaling about it and using the word “transcendent”. While meeting the necessary qualities of a superb pan au chocolat, this particular heaven-sent specimen also contained a quality, or an air about it, so ineffable and sublime that it was sky-rocketed from a mere pastry to an experience of divinity.

My journey quickly ended later in my trip when I left la belle Paris for Prague, where one peek into the pastry case of a cafe enclave cut out of one of the severe, vaulting, stone edifices customary of Prague, was enough to transfer my pursuance from chocolate croissants to pilsners, sausages and dumplings. But now, several years later, I’ve decided to re-awaken my search in Boulder, Colorado.


My first official stop in my documented search was Piece, Love and Chocolate on the west end of Pearl street, a little chocolate boutique which I had, before this stop, adamantly refused to patronize based solely on the fact that their clever punny name is confoundingly and irritatingly un-clever, and as far as I’m concerned, spelled wrong. But stepping into the shop for the first time and starting to peruse the glass cases of bon bons, I felt immediately duty-bound to try much more than just a chocolate croissant. I somehow however, sat down inside with just my pastry. It looked promising. 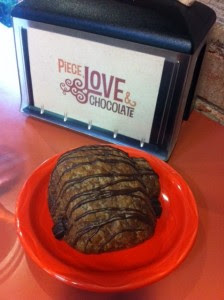 Shortly after biting into it, I realized that this chocolate croissant was done a little differently. Instead of being made of regular croissant dough and just being filled with chocolate, the dough itself was brown and chocolate infused. At first, the purist in me was appalled by this brazen stray from tradition, but it eventually grew on me. The dough, although chocolatey, was still a little sour, not sweet (interesting- not just exploiting sugar to make up for bad quality) and the filling inside was done perfectly; they nailed the quantity, flavor, and the dark, grainy consistency reminiscent of chocolate heated over a stove-top. Mmm! I give it a 7.


Before going on, I should probably list the qualities of what makes, in my book, a stellar pan au chocolat.

1.Flakiness- spana kopita-esque flakiness. Yet still dry, not greasy. A good chocolate croissant is nearly impossible to eat without making a huge mess- it should be a full committed experience.a) As a corollary to (1) and at the risk of stating the obvious: chocolate croissants should not be bready. With that being said, within a good chocolate croissant, consistency should vary: flaky top, tougher knotted ends (see figure 1A below) and a sturdy condensed base. 2.Just to nail home this point, bare with me whilst I rant a little longer about the ever-so-important croissant dough. Proper croissant dough is made from rolling dough out into large sheets, thinly painting the dough with butter, and folding it. This is done several times, alternating between buttering and folding the dough and chilling it in the fridge, limiting its ability to rise. The final product is let out to rise before baking for a very short time at high heat. This process makes for flaky, crispy dough, more like stacked layers of filo, than leavened bread. Cheaters however, skip this tedious process and instead opt for un-properly-processed or frozen dough, making for a pastry that is squishy with thick, leavened sacrilege, ie. bready! 3.Chocolate croissants should not be too sweet. We’re not looking for a candy bar, we’re looking for a delicate pastry, executed with mastery and confidence. I’ve had best experience with the chocolate filling formed into a little flat log with a slightly grainy, dark chocolate consistency, as opposed to a silky smooth, milky consistency. 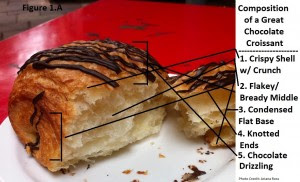 4.Presentation. I personally am not a fan of chocolate drizzled on top, but I’ve had very good croissants which have put this practice into use successfully. I do however, have a weak spot for powdered sugar dusting, which goes beyond chocolate croissants but works very nicely for them as well. And lastly, clearly stated in its french name, a pan au chocolat is not merely a croissant drenched or filled with chocolate but a unique and beautiful pastry unto itself, so its appearance should reflect this difference: shaped more like a thick folded blanket than a crescent. Okay? Okay. Onward.

Second stop: Spruce Confections. Spruce, located on Pearl street between 7th and 8th, bakes all of their own pastries in house and has the quaint Euro vibe that would seemingly guarantee fantastic, real-deal french pastries, so it was a natural choice for this search. They were however, out of chocolate croissants at the time I went. So I got a plain croissant instead. Then, nestling in with my substituion croissant and my computer, I discovered that they don’t have wifi, so all in all, I was pretty disappointed with my stop. And the croissant itself was barely above mediocre. No flaky crunch and no variance of consistency. Pretty boring; I give it a 5. But I’m so fond of their courtyard and quiet out-of-the-bustle vibe that I’ll be returning for that elusive pastry. And, knowing they don’t have wifi, will bring some company.

Croissant number 3: Breadworks. Horribly disappointing. I stopped in on the way home from work, which was well into the afternoon, so the pastries weren’t freshly baked. But the croissant was so bad anyway that there’s no way I’m going back. 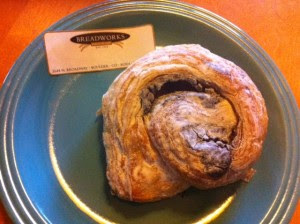 [Right: Breadworks?? More like Bread Doesn't Work!] Terrible bready consistency, no flavor, dry and they went so light on the chocolate that it seemed more like a mistake than an actual crucial ingredient. I actually didn’t even finish it, which is a first for me. I give it a straight up 1. I’m talking gas station pastry quality.

Last stop: Spruce Confections again. After many a fruitless return, I finally stumbled upon a fully-stocked pastry case and ordered my sought-after chocolate croissant. I gave it a good once-over, a few pokes and then bit into a corner. Hoping for a little flaky crunch, I was disappointed to find that this croissant too, was a bready, chocolate-drizzled waste of my time. Honestly, it was too boring to even go into detail describing it. Pastry wise, I feel like I’m in an airport terminal looking for a decent lunch during a layover and having to decide between a bag of “trail mix” and a limp anemic banana. 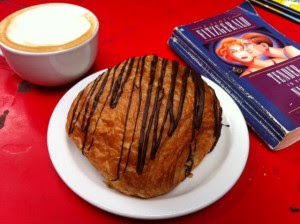 [Left: Regardless of technicality, this is not a bad way to spend a morning!]

The only good news of this failed search being: if you’re starting a business and are looking for an untapped niche market, the “actually half decent goddamn pastries” niche is one for you.

But, like the loyal croissant-er I am, I trudged onward in my Spruce Croissant meal, dipping the remains into my cappuccino foam, yielding optimal pastry pleasure, regardless of quality. (More on this practice in chapter 3 of my best-selling book “How to Make the Most of Your Entitled Life” by Ariana Ross).

After my long, exasperating and trying tour of mediocre croissants- made especially trying by the fact that neither sugar nor white fluffy dough gets along particularly well with my digestive system- I’m relieved to come to the end of my search. And just like how not all scientific experiments end with the hypothesized conclusions, I was never quite able to find a chocolate croissant up to my liking. Having said that, if you know of any secret stashes of great pastries, please let me know and I’ll write a special article in your honor, thoroughly reviewing it. Until then, I’ll be at home, detoxing from my butter overload.

What are you looking for...?

What do you want to see more of?